His alarm clock goes off at 3:45 a.m. He is at the district’s transportation bus lot by 5:00 a.m.  James Boyd, the Rock Hill School District Safety Coordinator, is a humble guy who has just been named by South Carolina Association for Pupil Transportation as the 2021 “Support Person of the Year.” He was surprised and honored by the recognition but isn’t one to jump into the spotlight. “I prefer to stay behind the scenes,” James Boyd said.

For the past 36 years, James Boyd has worked in the Rock Hill School District. Prior to his role as the Safety Coordinator, James was a bus driver for 28 years and happily transported thousands of children to and from school over the years. James has also been a trainer for the past 20 years and a classroom instructor for 6 years.

Before becoming a classroom instructor, James prepared by completing six months of training followed by an interview in Columbia, South Carolina. During the wait period to find out if he was accepted, James continued driving his school bus route. One drive, he had a crying elementary student who was having a bad day. James gave her some stickers to cheer her up. It was during this route, he found out the interview had gone well, and he was accepted. “I found out I was accepted when I was on the bus,” James said, “They came on the radio to tell me I had made it. But the best part was that little girl heard the news and gave me a sticker when she got off at her stop. Her congratulating me was one of my favorite memories.”

During the Covid-19 pandemic, James and the transportation department were there to help with getting food and supplies to families. “I never thought of the impact it made on people, it’s just something I do,” he said, “I help people, I don’t want credit.”

James’ humble demeanor was the same when he was awarded the South Carolina Association for Pupil Transportation 2021 “Support Person of the Year.” When his supervisor was describing the winner before making the announcement, James didn’t immediately know it was him. “I thought he was talking about my twin,” James said. Even though James would rather not be in the spotlight, he is more than deserving of this honor for all his years and hard work with the Rock Hill Transportation department. 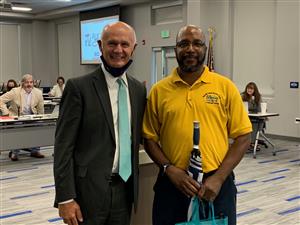