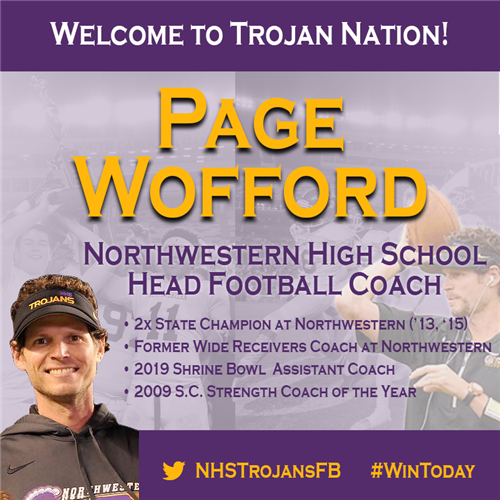 Northwestern High School has selected a familiar face to lead the Trojans tradition-rich football program. A team of school staff, community members, business representatives, district staff and a student comprised the committee who interviewed more than 15 candidates for the position.

Former assistant head coach Page Wofford returns to Northwestern after one year at Daniel High School to become the Trojans head coach. At Daniel, he was the offensive coordinator for a Lions team that finished 11-2 and AAAA Upper State Runner-Up.

“Coach Wofford's return to Northwestern provides us with someone who has a deep understanding of the standard we expect for our program,” said Northwestern principal Hezekiah Massey. “He also arrives on campus with knowledge of our student-athletes, staff and community. His work within our program in years' past and his success at Daniel speaks volumes about his ability to lead our program. We are excited to have him return as our new head coach, and we support him fully in rebuilding Trojan football.”

Wofford spent six seasons on the Trojans staff and was instrumental in helping Northwestern advance to three state championship appearances (2012, 2013, and 2015), including wins in 2013 and 2015. In his previous stint at Northwestern, he coached wide receivers and also spent three seasons as an assistant coach with the Trojans baseball team.

He has more than 20 years of coaching experience with stops at Carolina High School & Academy, Pickens High School, Wando High School, Hanahan, Northwestern, and Daniel. In addition to football responsibilities at Wando and Hanahan, Wofford served as the head strength coach, and was named the South Carolina Strength Coach of the Year in 2008.

“I am thrilled to have Coach Wofford rejoin the Trojan coaching staff. He understands the climate of football in our community, and he brings a solid plan to restore the winning traditions that are the foundation of our football program,” said Northwestern athletic director Lauren West. “His vision for reinstating the ‘Win Today’ player accountability program and academic plan are evidence that he has a clear understanding of what our student-athletes need to be successful on and off the field.  He is a proven leader with a strong moral compass.”

In the classroom, he has been a physical education teacher at the elementary and high school levels. He also previously served as an assistant administrator and assistant principal at one of the state’s largest high schools, Wando High School. His foundation of student-athlete success starting in the classroom can be traced to his time as an assistant academic advisor with the Clemson University football team, while completing his master’s in educational administration and supervision. Additionally, as a certified teacher and mentor, he values supporting and fostering relationships with beginning teachers to help them be successful in their careers.

“We are excited to welcome back Mr. Wofford along with his family. Mr. Wofford brings with him a wealth of knowledge and skills as well as a familiarity of Northwestern football,” said Rock Hill Schools superintendent Dr. Bill Cook. “We believe he will continue the level of excellence that Northwestern and the Rock Hill community is accustom to while ensuring our student-athletes maintain a strong focus on their academics and future goals.”

He and his wife Michelle have two sons, Huck, who will be a freshman at Northwestern, and Xan, who will be in fourth grade this fall.

View the Introductory Press Conference for Coach Wofford below.