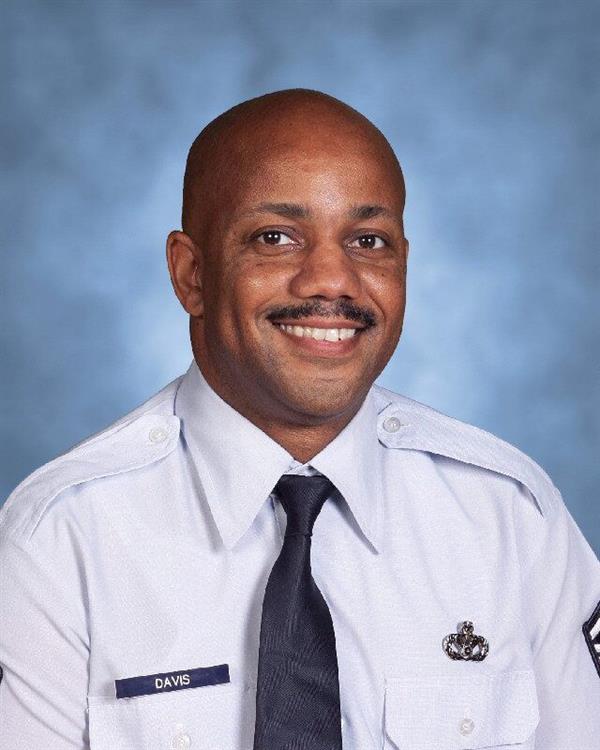 Sergeant Davis enlisted in the Navy Reserves and left for boot camp June 12, 1985. He switched to the active duty USAF in February 1989. He completed basic training and was assigned to Chanute AFB, Illinois for technical training in the Firefighter career field. In 1989 he was assigned to the fire station at Chanute AFB. There he learned the apprentice level techniques of a firefighter.

After 2 years at Chanute, he moved on to Howard AFB in Panama. Sgt Davis was a driver/operator for crash fire trucks that responded to aircraft emergencies. In February 1994 it was time to come back to the United States.

In 1994, Sergeant Davis was assigned to North Auxillary Airfield in North, South Carolina. During his time there he became a SSgt in the Air Force. He became a crew chief on the fire trucks that responded both on and off base to emergencies.

In June of 2000, Sgt Davis moved to Little Rock AFB, Arkansas and assumed duties as the station chief. Staff Sgt Davis became Technical Sgt Davis during his time at LRAFB, Arkansas. It was there that he challenged himself and became an Air Force recruiter. After time at recruiting school in San Antonio, TX he moved on to Atlanta, GA.

While Sergeant Davis was a recruiter in the Atlanta area he garnered many awards for recruiting. He won several top recruiting awards. While at an event at Clark Atlanta College, he appeared in a national BET commercial with 106 & Park personalities.  After the nearly 4 year tour was over, he went back to his love of firefighting.

Sergeant Davis was assigned to Eglin AFB, Florida as a station chief. It was there that he achieved the rank of Master Sergeant. He spent a year long tour as an advisor to the fire chief in Afghanistan. There he also ran a school to teach firefighting to the Afghans from all over the country. He ordered fire trucks and ensured they were delivered to the different cities across the country. He also convoyed back and forth across the country. In his down time in Afghanistan, he ran the mail room at the airport in Kabul.

During his career Sergeant Davis accumulated several firefighting certifications. He was a rescue technician, EMT basic technician, hazardous materials technician, fire instructor I and II, fire officer I, II and III, driver operator for several versions of fire trucks, fire investigator, fire prevention I and II and served as an assistant fire chief of operations and prevention.

Sergeant Davis retired from active duty at Shaw AFB in Sumter, SC in July 2012. He taught AFJROTC at Selma High School in Selma, Alabama from August 2012 until his arrival at South Pointe in July 2014. He and his wife, Vanessa (Johnson), are blessed with six grown children and four precious grandchildren. They spend as much time as possible with the grandkids.